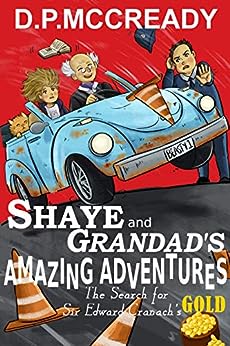 Exceptional read
Loved the book it was a great story the cover picture was great. Reading about the different characters I felt I knew them in person. There was pictures throughout the book which visions what was happening. Everything about the story was very well written you felt that you were with them. I don’t want to say too much about it as don’t want to spoil anyone’s read however would honestly recommend this book.
———————-

A Strange old House with hidden passages and a dark secret?

A mystery so incredible it would blow your mind.

What lies in wait for our two fearless Adventurers only time will tell?

When Shaye woke on what seemed like any other normal day he never expected even in his wildest dreams to be searching for hidden treasure. Or, to be stuck in a dark cellar with an odd smelling Zombie with false teeth and a Big wonky eye. Inside the big old creepy house, there are hidden rooms and secret passages and strange things you couldn’t imagine seeing even in the scariest films.
William, Shaye’s grandad had decided to visit his oldest friends at the end of the road care home. A house once owned by Sir Edward Cranach an industrialist with a love of gold. Old Terry Chapman had found a strange little book in the library with five clues to where the gold is buried, but they are not alone in this quest, someone is watching them. Who is the shadowy figure? And can Shaye, grandad and his friends find the gold before the stranger?

——————-
“What was mum on about when she said she was worried about you grandad?”
“Oh, nothing to worry yourself about lad, sometimes we all forget things. If I ever get as forgetful as Sid then I’ll start to worry.”
“Why what happened to him?”
“Sid was always meticulous about his clothes; he would spend hours getting dressed in the mornings, he even ironed his socks and underpants, until one day.”
“What happened grandad?”
“Well, on this day he got dressed as normal and headed to the local shop for his morning paper, it was a dark morning and everything was fine until he stepped inside the shop.”
“What happened?” said a wide-eyed Shaye again.
“His clothes were immaculate as usual, He was wearing a crisply ironed shirt, his favourite red-spotted bowtie a rather splendid tweed jacket and his highly polished brown shoes, you could almost see your face in them, but there was one vital piece of clothing missing.”
Shaye scratches his head. “What was that?”
“He had forgotten to put his pants on. He was standing in the middle of the shop in his bright orange underpants. It was all very embarrassing; he had to wrap his newspaper around his waist to go home. The old lady that works in the shop fainted and had to be taken home.”
“What happened to him?”
“He moved into, The end of the road care home, where we are going today lad, I will introduce you to him when we get there.”
———————————-

An Amazing fun Children’s illustrated Mystery and Adventure book.
GET IT NOW WHILE IT’S FREE, hurry it won’t be free for long.